The 13 acres just out front Deah Kinion's 40-acre Zumbro Falls farmstead is retired cropland. It's covered mainly in brome grass and a handful of other non-native plant varieties, and it's surrounded by thick woodland. Here and there, much to Deah's delight, prairie flowers native to the region, such as goldenrod and milkweed, poke up out of the green. Wild turkeys, pheasants, toads and snakes also make this field their home. 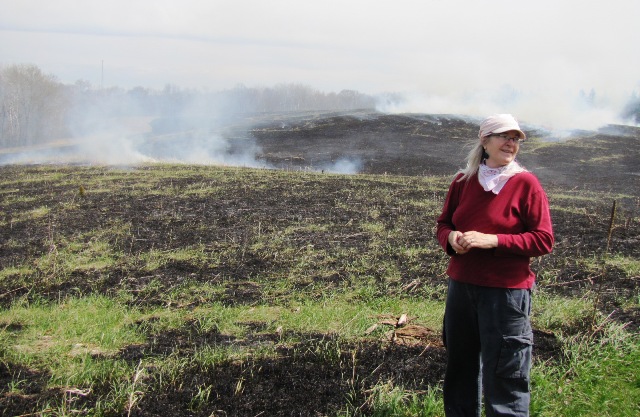 The land is enrolled in the US Department of Agriculture (USDA)'s Conservation Reserve Program (CRP). In return for making regular payments to landowners over the course of 10-year contracts for CRP ground, the USDA requires the land be mowed or burned to maintain it as open grassland for wildlife habitat. The landowner gets to decide which practice to use. To Deah, who would love to see this patch of ground become prairie one day, burning the land seemed like a better way to make space for more native plants.

Indeed, one of the benefits of burning is that it suppresses woody vegetation and non-native plants. Because prairie grasses evolved overtime with periodic fires that for thousands of years swept over the prairie, they have deep roots that can withstand a blaze. However, for the purposes of the USDA, the reason for this burn was simply to maintain the overall health of CRP grassland, rather than to remove any particular invasive species.


Never before having been involved in a prescribed burn, planning for this activity was uncharted territory for Deah. "I didn't know what I was getting into," she recalls, "or who would need to be involved, or how the land would burn." She knew she needed a burn permit, though, and that she could get that from the Minnesota Department of Natural Resources (DNR), so that's where she started. The DNR then asked her for a "burn plan," which would list information about the location of the land, who would be leading the burn, how many people would be helping, what equipment would be used, contact information, and an aerial photo.

It was at this point that Deah decided to get in touch with a speaker she had heard at a Women Caring for the Land meeting the previous fall.

It was Larry Gates, a land management expert who is retired from the DNR. He had spoken at this meeting about prescribed burns and other ways to manage invasive species. Larry was able to help Deah complete her burn plan for the DNR by agreeing to be in charge of the burn, and letting her know how many helpers they'd need and what equipment would be involved.

It's an enduring personal interest after a full career with the DNR that motivates Larry to assist landowners now and then with prescribed burns. However, as he points out, a handful of professional land management companies and contractors also offer this service. Landowners can contact the DNR for a list of service providers. Larry's advice for finding a qualified candidate is to ask about their training and experience, of course, and also about how they clean equipment between jobs so as to avoid spreading invasive plants to new places. 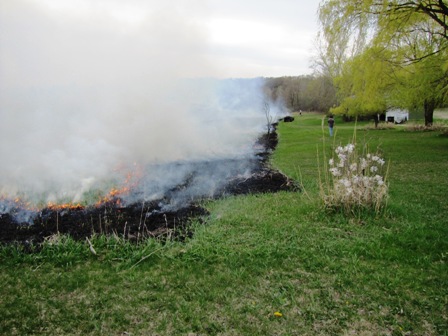 The price of a prescribed burn depends on the number of acres and other factors, such as ease of access to the land and how complex the perimeter is. For instance, avoiding woods or another person's property along a burn line would take more careful work than managing a burn line through the middle of open grassland, and this increased difficulty raises the price accordingly. Based on estimates from a handful of Minnesota contractors, the price for a prescribed burn typically ranges from $50 to $150 per acre. Deah paid much less than this, however, (a total of $325 for 13 acres) and was reimbursed for half of that cost by USDA.

Landowners can potentially save money by mowing a strip around the burn area, making the job easier for the team conducting the burn, or by coordinating with neighbors to do more than one burn in a day, thus maximizing the value of the trip for the contractor. For eligible landowners doing a prescribed burn on CRP land, USDA will share the cost of the burn.

The next step for Deah after submitting her burn plan was to wait for the right weather conditions and wind direction. It had been a rainy spring, but the ground was dry enough by late April. Timing is critical, Deah explained, because waiting too long can allow for too much green vegetation, reducing the land's burn potential. Moreover, the CRP contract doesn't allow disturbances to the land once nesting season begins around May 15. Some landowners have waited a full two years for the right conditions.

Finally, Larry proposed a date for the burn, and Deah called an automated DNR line to "activate" her burn permit by letting the agency know that the prescribed burn would happen the next day.
It took a team of six to safely burn the land. Larry and his partner used drip torches to light the perimeter, while Deah, her husband Paul, and their nephew and his friend kept the grass outside the burn area from catching fire. They did this by raking dead grasses in toward the fire, and spraying water from water canister backpacks onto the land outside the burn area. Everyone helped stomp out the flames with "flappers," long sticks with big silicone patches at one end that Deah describes as looking like large spatulas.

Deah was nervous at first about whether the fire could get out of control, but then she began to see that fire can burn in a predictable way. "It was remarkable how smooth it went and how beautiful it was," she said, explaining that once the perimeter had been lit, the fire naturally burned in toward the center. It took her breath away, she said, to watch a billowing tornado of smoke rise up from a long stretch of small flames leaping no higher than a foot or two.

The whole process took about three hours to complete, and withi 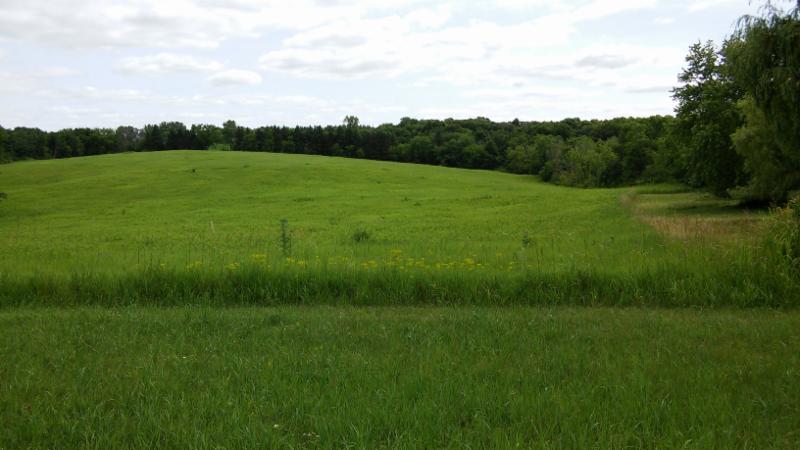 n weeks, new life was sprouting up from the charred ground. Just after the burn, Deah distributed several handfuls of prairie seed onto the land, and has been searching for evidence of their having taken root. It's important to know that full conversion of an old field to a patch of prairie would require many more steps that were taken in this case. Nevertheless, to date she's found more goldenrod and more color in general in the field.
Note: This 40 acre homestead, 17 miles north of Rochester, MN is for sale, including CRP acreage, at this link:
http://www.flexmls.com/cgi-bin/mainmenu.cgi?cmd=url+other/run_public_link.html&public_link_tech_id=159ucer03roj&s=4&id=1&cid=1
Written by Hannah Lewis