History of Farm to Child Care 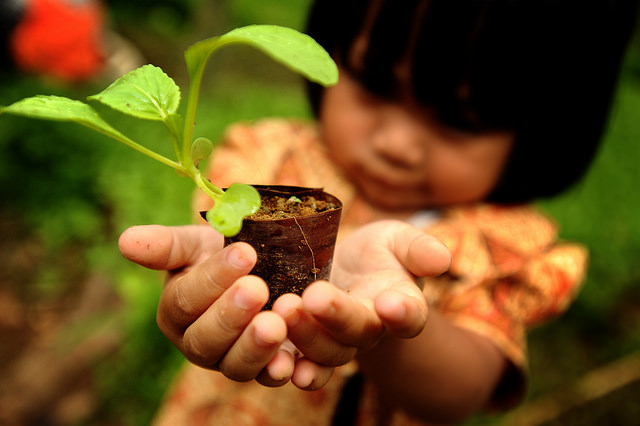 Farm to Child Care (F2CC) is a nationwide movement connecting childcare providers and young children with local farmers for the purpose of providing healthy meals and snacks, as well as incorporating local food themes into childcare curriculum and activities. Local foods are determined by the consumer but usually refer to the same region, within a 100-mile radius, the state you live in, or some other combination. Local foods are fresher and have retained a great deal of their nutritional content, opposed to food that has traveled thousands of miles or been grown for the primary purpose of a long, beautiful shelf life. When children learn, they learn by example; through the curriculum, taste testing new foods and food preparation techniques, gardening, or farm visits. Providers, families, and educators can make a by step changes, and small modifications in what they're already doing, to include nutrition education and information about agriculture and kitchen skills into everyday activities. Whether food is purchased directly from farmers, farmers markets, Community Shared Agriculture (CSA), or picked from the garden in your own backyard, Farm to Child Care has the potential to help children learn healthy eating habits and participate in quality learning environments.

Did you know, ages 3-5 are the most influential years of developing taste preferences?
Also, “30 percent of American kids between the ages of 2 and 5 are either overweight or obese,” from IATP.

Farm to Early Care and Education started under the name of Farm to Preschool, which evolved to Farm to Child Care. The most recent name change more accurately encompasses various early care settings. Although this isn't a comprehensive list, here are numerous turning points in the history of Farm to Early Care.

The birth of Farm to Preschool began in the year 2007 in North Carolina, with funding from the Appalachian Sustainable Agriculture Project (ASAP). They have helped establish gardens and worked on bringing locally grown food into their food service at Head Start centers. You can find Farm to Preschool on the Growing Minds, Farm to School website.

ASAP sparked interest across the country and a Farm to Preschool program in Oregon popped up between 2008-2009. Head Start was one of the first locations to pilot the program. In 2014 they announced the creation of a Farm to Preschool Learning Community, where early education providers could apply for mini-grants for Farm to Preschool projects to introduce food and garden-based education, and the ability to purchase local foods. (Picture.)

A group in Massachusetts discussed bringing families together with locally grown food in 2009. By 2012 two preschools had a ‘no canned produce’ policy, 2,200 children ate fresh produce, and over 57,000 pounds of fresh local food was purchased. They reported that preschool agencies saved up to 32 percent monthly by purchasing locally.

Not long after, a Head Start director in Utah wanted to explore ways to provide more nutritious meals to its children. The Central Kitchen initiative of Utah Community Action set it’s own best practices, then set out to find a vendor to support Head Start’s initiatives of providing nutritious meals. There was, unfortunately, no vender that could provide 2,400 meals a day for Head Start, so they looked into alternative options. In 2009 they started the construction of a central kitchen and it was completed the following year. Though it began as a pilot project of 300 meals a day, the kitchen quickly turned into a hub for serving more than 4,000 meals a day to Head Start children and other children in the community.

The Urban & Environmental Policy Institute at Occidental College (UEPI) of California followed suit in 2009 with a Farm to Preschool program. The program was honored by Michelle Obama's Let's Move! Child Care initiative with a 2012 Recognition Award. This program has so many layers and examples, it is definitely worth a read. Here is their Farm to Preschool training manual.

Congress approved National Farm to School month in 2010. We all celebrate in October the connections between children and local foods! It encompasses child care and K-12 schools.

Healthy Sprouts was founded in 2010 as a nonprofit organization in Lawrence, Kansas, spreading the concepts of Farm to Child Care. This program had key aspects included creating a healthy environment and educating nutrition to children, gardening in child care settings, Community Supported Agriculture (CSA) for families and child care centers, age-appropriate local food-based curriculum, family outreach and training for early educators. Healthy Sprouts went on hiatus in 2016 and is no longer offering services. 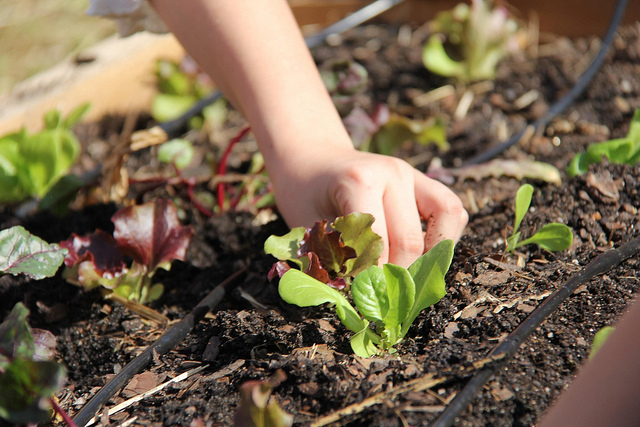 The UEPI program inspired the Farm to Keiki Preschool Program, which formed in 2011. Farm to Keiki is the only one of its kind in the state of Hawaii that provides curriculum, training, and garden support. More info here.

That same year Duke University created a gardening program called Watch Me Grow. Having had the 11th highest rate of childhood obesity in the United States, North Carolina needed to do something about the 30 percent of children under 5 who were overweight or obese. Farm to preschool programs encouraged children to try a variety of nutritious fruits and vegetables while learning about how food is grown and where it’s grown. Watch Me Grow is a gardening program that teaches child care centers how to establish gardens and use the produce to provide healthy nutritional food to children because they don’t meet the daily recommended fruits and vegetable intake. “By subsidizing the purchase of fresh fruits and vegetables, we can shift child care centers from buying juice (with high levels of natural sugars) to buying fresh produce.” In the long run, it teaches children healthy eating behaviors and reduces health problems by reducing weight gain in children.

Farm to School was such a success in Rhode Island, that they developed Rhode Island Farm to Preschool in 2011. Encouraging preschools and childcare centers to support local farmers, implement learning gardens, agriculture, and nutrition education programs. In the summer of 2012, they offered Farm Fresh Veggie Boxes to the Children’s Workshop network of pre-schools. Currently, they have 15 programs and 270 participants.

The Institute for Agriculture and Trade Policy (IATP) developed the Farm to Childcare program in late 2011. They partnered on a new Farm to Childcare initiative with the Hmong American Farmers Association (HAFA) and Head Start. The cohesiveness of their partnership resulted from constant communication and collaboration between the three entities. They have been mentioned in a PFI study on Farm to Early Care and Education, it’s a must read!

A publication from the National Agricultural Library USDA in Maryland released in 2013 a ‘Food and Nutrition Fun for Preschoolers’ Information pdf full of book titles, audiovisual materials and lesson plans for anyone interested in teaching nutrition to preschoolers in a fun sort of way.

Renewing the Countryside worked with partners in public health and professional development through 2012-2013 to author the Farm to Child Care Training of Trainers in Minnesota. By 2014, the Minnesota Center for Professional Development approved of the training, allowing child care providers to attain in-service hours to count towards their continuing education credits. In 2015 Renewing the Countryside piloted a learning group, connecting providers with training, technical support and each other, along with farmers willing to sell CSA shares to child care settings, and connect children with where their food comes from, how and where it grows.

From there the Farm to Preschool website sprouted in collaboration with the National Farm to School Network.

Creating Child Care Center Production Gardens from North Carolina State University Extension Services. Growing warm-season and cold-season fruits and vegetables, along with cooking these, with aid from the children. Also publications about composting and vermicomposting.

In 2015, the next step for Farm to Child Care expanded to Head Start centers in Minnesota with help from the Institute for Agriculture and Trade Policy and the Hmong American Farmers Association. IATP also started bringing together people and organizations to form a state coalition called the ‘Farm to Early Care and Education Coalition’, which meets bimonthly now.

Most recently, the Institute for Agriculture and Trade Policy brought together many different people from all ages, races, and background to fight for a Farm to School and Farm to Child Care policy here in Minnesota.

Also in 2017, the USDA has recognized the potential of Farm to Preschool/Farm to Child Care as having the same core elements in the Child and Adult Care Food Program, which most schools, child care centers, and family in-home care utilize in their own food programs to procure and produce healthy meals for the children in their care.

Child Care gardening is a new concept, and it’s gaining momentum. They are starting to appear in many different child care settings, where they are essentially gaining an additional classroom outdoors, learning and growing, just as the plants do. Providers have told me, children seem to calm down and focus on the task they are given, especially when they have something meaningful to do, something they can show to other kids, teachers and their parents. In the end, they have a beautiful plant they can harvest, and they are more willing to try a healthy new food they have nurtured.